Chip Charlton is a future classic, destined to be talked about in the same way as Tintin or Snoopy. It's a joy from start to finish, effortlessly endearing but still laugh out loud funny. Chip represents comics at their finest - exquisite, affectionate, and riotously funny. 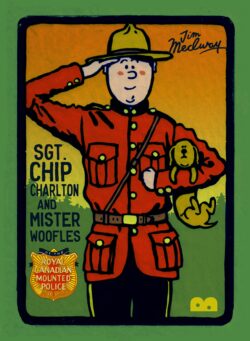 From the pages of The Phoenix!

Scared of horses but driven to fight crime and seek justice?

What is a young Canadian to do?

Chip Charlton joins the Royal Canadian Mounted Police, picking his daschund buddy over the conventional equine sidekick. Sgt Chip soon proves the naysayers wrong, and time after time, crime after crime, demonstrates how even a weak stomach is no obstacle to following your dream.

Jim Medway’s gentle, but beautifully observed humour has gained him much praise over the years, including being nominated for the Young People’s British Comics Awards in 2013 for his first graphic novel Playing Out (Blank Slate 2013).

Jim has also illustrated The Land of the Frontiers, Turvytops and Big Dogs, Little Dogs for 8 Books. He regularly illustrates for museums and heritage venues around the country.